Air infiltration: The amount of air that leaks in and out of a building through cracks in walls, windows and doors.

Air leakage rating: A measure of the rate of infiltration around a window or skylight in the presence of a specific pressure difference. It is expressed in units of cubic feet per minute per square foot of window area (cfm/sq ft) or cubic feet per minute per foot of window perimeter length (cfm/ft). The lower a window's air leakage rating, the better its air-tightness.

BTU: An abbreviation for British Thermal Unit - the heat required to increase the temperature of one pound of water one degree Fahrenheit.

Casement: A window sash that swings open on side hinges; in-swinging are French in origin; out-swinging are from England.

Condensation: The deposit of water vapor from the air on any cold surface whose temperature is below the dew point, such as a cold window glass or frame that is exposed to humid indoor air.

Conduction: Heat transfer through a solid material by contact of one molecule to the next. Heat flows from a higher-temperature area to a lower-temperature one.

Convection: A heat transfer process involving motion in a fluid (such as air) caused by the difference in density of the fluid and the action of gravity. Convection affects heat transfer from the glass surface to room air, and between two panes of glass.

Desiccant: An extremely porous crystalline substance used to absorb moisture from within the sealed air space of an insulating glass unit.

Dew Point: The temperature at which water vapor in air will condense at a given state of humidity and pressure.

Double glazing: In general, two thicknesses of glass separated by an air space within an opening to improve insulation against heat transfer and/or sound transmission. In factory-made double glazing units, the air between the glass sheets is thoroughly dried and the space is sealed airtight, eliminating possible condensation and providing superior insulating properties.

Double-hung window: A window consisting of two sashes of glass operating in a rectangular frame, in which both the upper and lower halves can be slid up and down. A counterbalance mechanism usually holds the sash in place.

Edge effects: Two-dimensional heat transfer at the edge of a glazing unit due to the thermal properties of spacers and sealants.

Extrusion: The process of producing vinyl or aluminum shapes by forcing heated material through an orifice in a die. Also, any item made by this process.

Fogging: A deposit of contamination left on the inside surface of a sealed insulating glass unit due to extremes of temperatures or failed seals.

Frame: The fixed frame of a window that holds the sash, or casement, as well as hardware.

Gas fill: A gas other than air, usually argon or krypton, placed between window or skylight glazing panes to reduce the U-factor by suppressing conduction and convection.

Glass room addition: A room addition made primarily of glass; a builder's term used interchangeably with the term "sunroom."

Glazing: The glass or plastic panes in a window, door, or skylight.

Glazing bead: A molding or stop around the inside of a window frame to hold the glass in place.

Heat gain: The transfer of heat from outside to inside by means of conduction, convection, and radiation through all surfaces of a house.

Heat loss: The transfer of heat from inside to outside by means of conduction, convection, and radiation through all surfaces of a house.

Hinged windows: Windows (casement, awning, and hopper) with an operating sash that has hinges on one side. See also Projected window.

Hopper: Window with sash hinged at the bottom.

Horizontal slider: A window with a movable panel that slides horizontally.

Infiltration: The movement of outdoor air into the interior of a building through cracks around windows and doors or in walls, roofs, and floors.

Infrared radiation: Invisible, electromagnetic radiation beyond red light on the spectrum, with wavelengths greater than 0.7 microns.

Insulating glass: Two or more pieces of glass spaced apart and hermetically sealed to form a single glazed unit with one or more air spaces in between. Also called double-glazing.

Interlocker: An upright frame member of a panel in a sliding glass door which engages with a corresponding member in an adjacent panel when the door is closed. Also called interlocking stile.

Lintel: A horizontal member above a window or door opening that supports the structure above.

Long-wave infrared radiation: Invisible radiation, beyond red light on the electromagnetic spectrum (above 3.5 micro meters), emitted by warm surfaces such as a body at room temperature radiating to a cold window surface.

Low-conductance spacers: An assembly of materials designed to reduce heat transfer at the edge of an insulating window. Spacers are placed between the panes of glass in a double- or triple-glazed window.

Meeting rail: The part of a sliding glass door, a sliding window, or a hung window where two panels meet and create a weather barrier.

Metal-clad windows: Exterior wood parts covered with extruded aluminum or other metal, with a factory-applied finish to deter the elements. 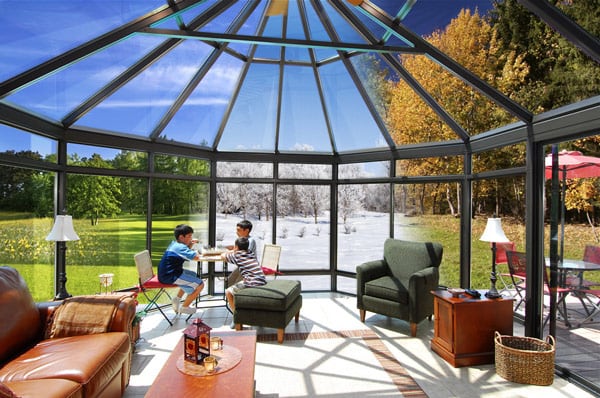 Please fill out the form below and we will be in touch to schedule your free in-home consultation.